Virtual Exchange Alumnus is Committed to Empowerment and Advocacy

Azzen Abidi is working to connect people with disabilities in his Tunisian community with technology solutions to improve their lifestyles. The idea started during his virtual exchange, the Civic Tech Leadership Program, which was implemented by the National Democratic Institute (NDI). Azzen continues to fight to implement his idea through hard work and advocacy. 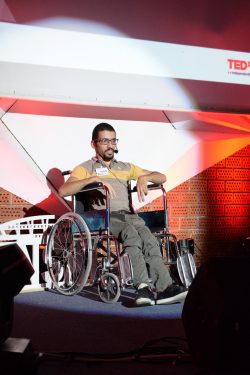 The National Democratic Institute’s (NDI) Civic Tech Leadership Program brought young people from the United States, the Middle East, and North Africa together through virtual exchange to collaborate on technology-based solutions that address public-interest problems. Azzen Abidi developed a unique project idea to address this goal: a simple, easy-to-use application that would empower people with disabilities in Tunisia by connecting them with providers of essential services, such as education and healthcare. This platform, HopeR, was inspired by Azzen’s experience as a person living with a physical disability in Tunisia.

Often, when international exchange programs have follow-on implementation components, students have trouble translating their ideas into reality in their own local contexts. Despite these common challenges, Azzen continues to find a way to make his idea and platform into a reality in his community. One way he has done so is by building a social enterprise in Tunisia to increase local support for his platform among stakeholders and local funders. This social enterprise, Handy Media United (HMU), empowers people with disabilities by developing custom tech solutions to improve their lifestyles and well-being.

In addition to his dedication to HopeR, Azzen focuses on other ways to move his community forward. He contributes to local youth empowerment initiatives and the burgeoning tech startup environment of Tunisia, and is an advocate for people with disabilities. No matter what project he is working on, Azzen consistently channels his energies towards youth empowerment, building inclusive communities, and breaking down destructive social norms.

Through the virtual exchange, I was able to polish my communication skills which helped later in my career. When I started working on the civic tech project from my tiny bedroom, I had no idea it would turn to something vivid. The virtual exchange was an opportunity to learn the truth behind starting impactful projects... It’s really hard.

Azzen believes that his virtual exchange program was critical to his current success and community impact. “I am a relatively shy person and I had always found challenges when it comes to getting my ideas across,” he said. “Through the virtual exchange, I was able to polish my communication skills which helped later in my career. When I started working on the civic tech project from my tiny bedroom, I had no idea it would turn to something vivid. The virtual exchange was an opportunity to learn the truth behind starting impactful projects… It’s really hard.” Azzen carries this lesson with him today, both in his professional role as a content marketer at a start-up based in Silicon Valley, but also in his community development work and his advocacy.

His visibility and advocacy for people with disabilities in his community, and in the tech sector where this population is even more marginalized, is powerful. When describing how he sees the impact on his community, Azzen said, “breaking stereotypes surrounding people with disabilities is definitely my biggest success. It’s been really hard to prove that disability doesn’t affect performance or quality work. Most people just assume you are incapable just because you have a disability.”

The virtual exchange program gave a toolbox to use for a lifetime...the program invested in the participants as future leaders to impact their communities.

Azzen’s advocacy and community outreach includes a recent TEDx presentation, meetings with government officials, a promotional road trip around Tunisia lifting up people with disabilities, and participating in “The Better Tomorrow”.  A link to his Better Tomorrow story can be found here: http://bit.ly/AzzenBetterTomorrow.